I've been busy developing multiplayer lately. There is a huge amount of work to be done for this task, which makes it difficult for me to switch on to other tasks. So, as you may have noticed, this resulted in the frequency of the updates having decreased over time. To dispel any doubts you could possibly have related to the progress and future development of the game, I decided to continue writing updates in this blog. (Seeing as some players had already made claims that the developer had abandoned the game, which is far from the truth.)

After the game released, I published a roadmap for the near future:

It listed the following items:

As you can see, most of this list is already ready. Only the third-person view and the co-op mode remained.

This is the only item from the list that was eventually canceled. In fact, a lot of work has been done on this task. A special version of the game was prepared, in which you could tilt the camera and look forward. In the first moments it even seemed that something could come of it. However, the further we tested the game in this mode, the more we became convinced that this view simply does not fit this game.

The first reason is battles. The radius in which monsters begin to "see" the main character is configured in such a way that when enemies appear on the screen (when viewed from above), they can see you and run up to fight, but when they are outside the screen, they cannot. When viewed from a third person, you will notice them at a much greater distance, so you will be able to take your bow and shoot them from a distance while they run towards you.

The second reason is optimization of models and environment. Many models do not have polygons that are not visible from above. For example, the barn model does not have an underside of the roof: 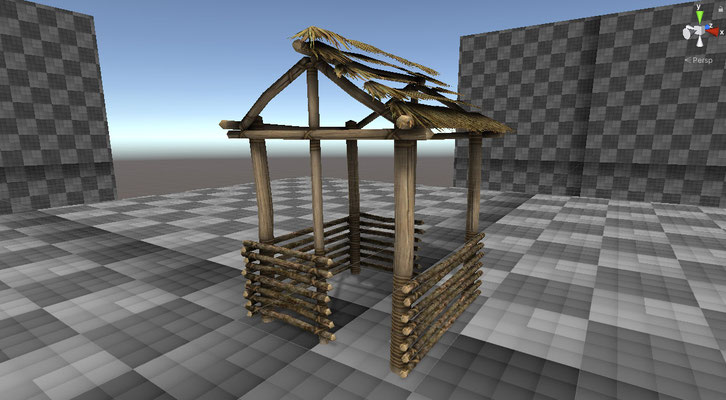 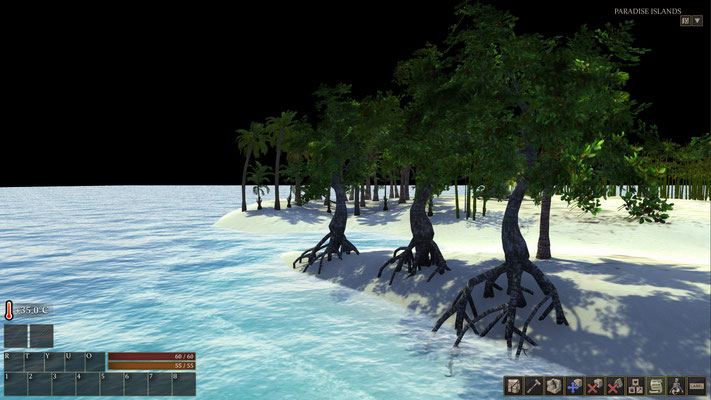 The third reason is the design of locations. The game was originally designed for a top view, so all locations are quite flat - they have almost no height differences. When viewed from above, terrain slopes are difficult to notice, but they become a big problem when building a base. For example, notice this slope to the shore: 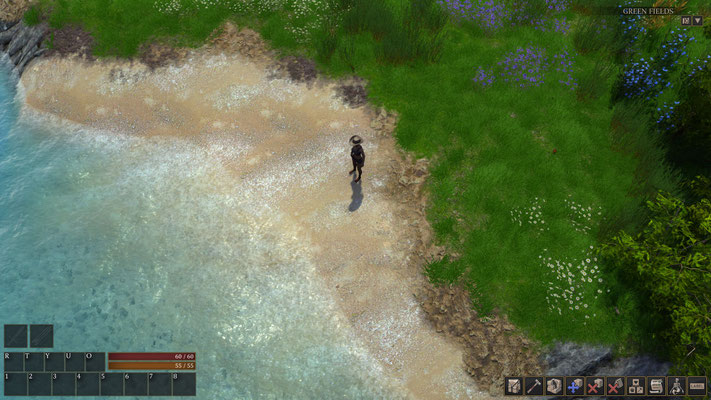 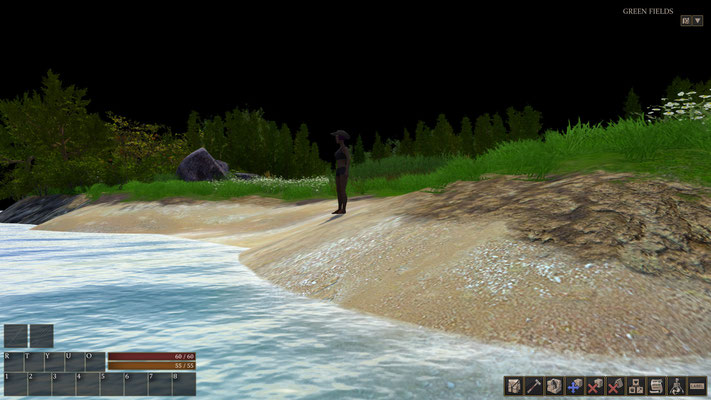 Also, all trees are limited in height by the level at which the camera is located. All these features become too noticeable when viewed from a third person - locations start to look very flat, boring and tasteless. 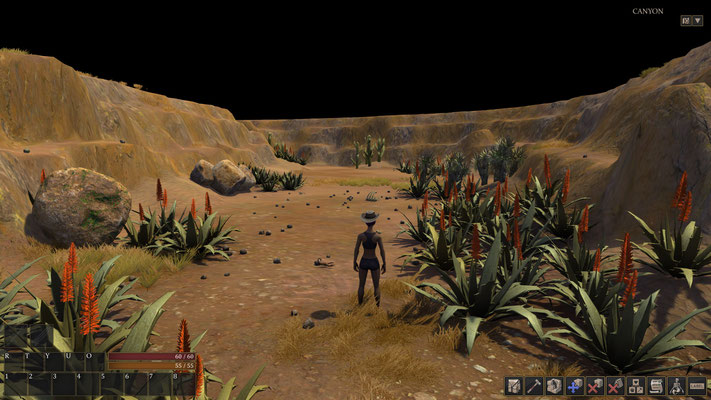 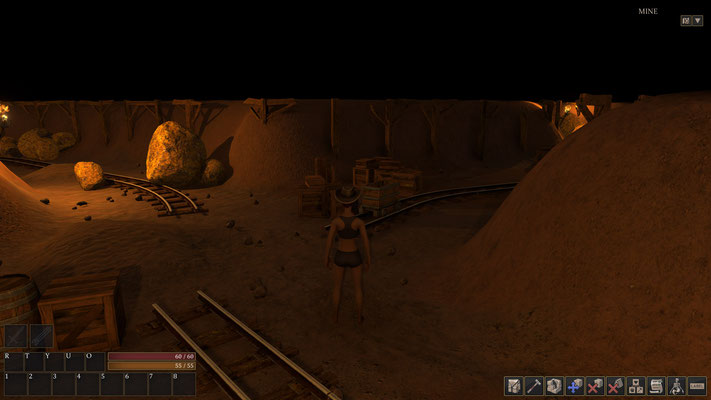 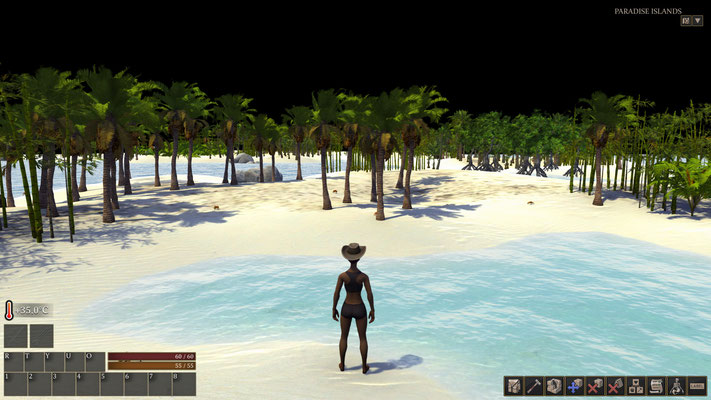 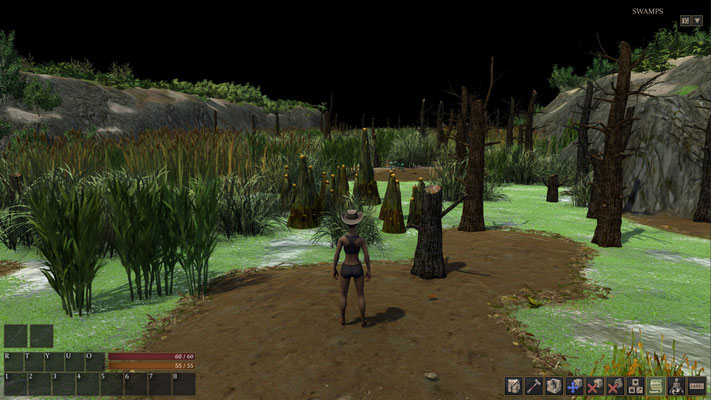 Finally I decided that I would have to change too much, and in the end I would get a completely different game altogether.

The last thing from the list that remains to be implemented is the cooperative mode. This is exactly what I am currently working on. There is a lot of work here, as there are many difficulties - in the next blog posts I will talk more about them. I gave up using ready-made networking solutions and I write all the networking code myself (which is something I will elaborate on in another update). But the work is moving. The most difficult and boring part of it has been already done - the implementation of all the auxiliary systems: lobbies, transferring files over the network, setting up connections between players, different methods of transferring packets, the ability to reconnect (which, by the way, was absent in the first part of the game), the ability for all players to independently jump across locations (which was also impossible in the first part of the game). All movements of characters and their interaction with locations are synchronized.

Unfortunately, the post has already turned out to be quite long, so I'll tell you more about all this in further ones, and for now I'll list only main features: