While game balancing is in process, let's return to the comparison of the first and the second parts in numbers.

So, in total, in the first Force of Nature there are:

In Force of Nature 2 many constructions have several upgrade levels. However, different levels of the same table are essentially different tables: they have different recipes and look different. Therefore I will consider such levels as unique buildings. Ready-made dwelling houses (as it was in the first part) will no longer be available. As I wrote in one of the previous posts, houses will now be built from pre-designed elements: a floor, walls, doors, windows and a roof. But I will count all such a set for 1 building. Among the innovations of the second part there will be animal barns, feeders and so on.

Total: 94 buildings (almost twice the amount of the first part).

Game development is still in process, so this list is not complete. Maybe, there will be more of them.

It was quite difficult to count all the sounds, because there are sooo many of them. And yes, there are variations again. At the same time, large number of variations is very important for sounds. Many sounds such as footsteps,

or strikes sound very often and regularly. Without a sufficiently large number of variations, the repeatability of the same sounds will be too obvious. When calculating, I conditionally divided all sounds into the following categories:

P.S. The post turned out to be about numbers, so to decorate it I'll add a screenshot of the battle against spiders: 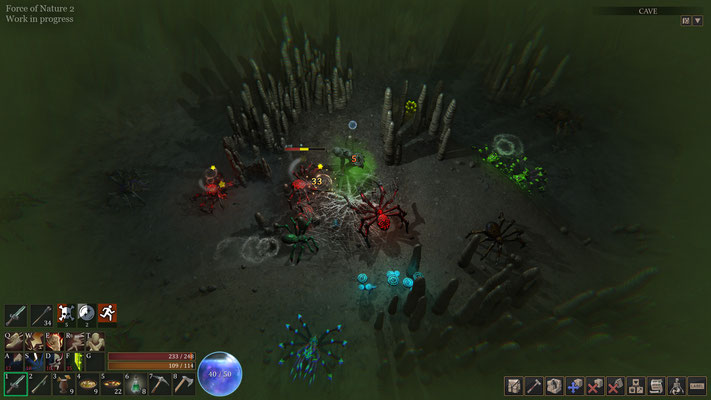