Welcome to the Force of Nature 2 development blog!

My name is Artem. I've been developing the second part of the game since August 2017 - i.e. already 2 years. Now a lot of work has been done, so I can make predictions about the date of release. I think it will be in the spring of 2020.

In this post I'll tell you why I decided to make the second part, and not update the first game. Yes, the first part of the game really has many drawbacks - balance, control, user interface, outdated graphics. I'd like to fix all of this.

A little history of the creation of the first part of the game.

To begin with, I made a big mistake by deciding to make the game from beginning to end by myself, without using game engines. Initially I did not even think that I will sell this game. I was interested in diving into the study of the mechanisms of the game engine and creating everything with my own hands. I started development in August 2011, exactly 8 years ago. Then it seemed to me that I would finish everything in 1 year. The game was released in December 2016. It took a lot of time to develop physics, animation, sound processing, resource management, artificial intelligence of monsters, user interface and more. In addition, the level of all these systems did not reach modern standards. The render distance is very small, the sounds lack reverb and other effects, the user interface has few tools for aligning elements, and so on. Finally, I completed the game. And I would like to add tons of new content to it. But adding each new feature took too much time, because every time I had to edit my engine, add new functions to it. In addition, I watched a lot of streams on my game and realized that I made some mistakes in the game design. In the end, I decided to take the popular game engine and create a new game from scratch.

In the second part of the game will be:

- A story with multiple endings

For 2 years of development, I made everything that was in the first part, and even more. The game has changed a lot. Probably the most noticeable of the changes is the camera. The game now has an RPG game format. The player is always in the middle of the screen, and the movement and attack are controlled with the mouse. Since the game is a mixture of RPG, strategy and farm genres, this format justifies itself. 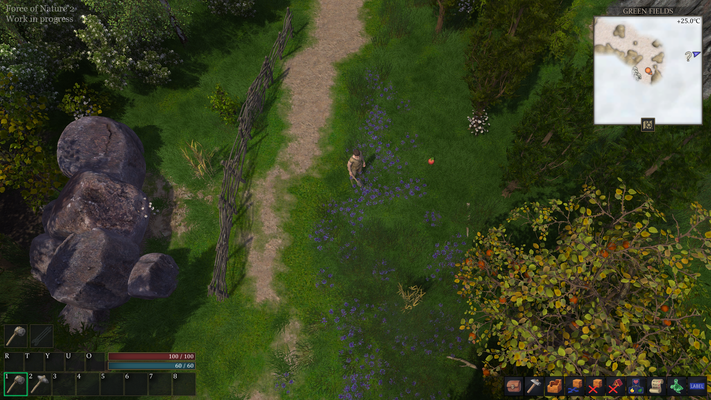 That's all for now! More details and screenshots in the following posts.